Memories from the grandparents house...

About 4-5 years ago, one of the "maali" who roam around on cycles selling plants and little saplings, sold me a pot of lily saying bright red lilies with bloom from the plant. Since it was for Rs. 20.00 I didn't think much and bought it. And all these years it just bloomed leaves, leaves and some more leaves. There was no sight of a flower or even a bud but I still liked the lush green leaves of the plant and didn't exchange it with the maali even though I bought many more plants from him over the years. I could have, saying it is not blooming as he had promised, like I did with some other plants but somehow I just didn't want to.

Since this week it has started blooming. Blooming white lilies. The day I saw them I was so ecstatic. As my memory of these lilies is from my Nana-Nani's house. That's where I saw them first and that was the last too. I never saw these lilies again till this week. And I'm so happy that they are blooming right in my house!! 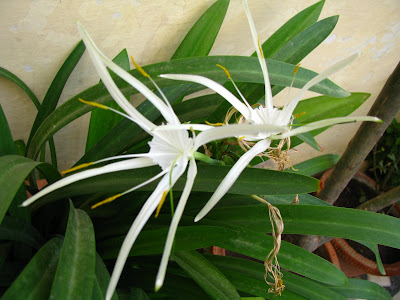 It feels like that something that had gotten lost has come back! Is it a sign? I don't know. Maybe I'm thinking too much into it. Anyhow, that is the picture of it which I just couldn't resist sharing it with you all!