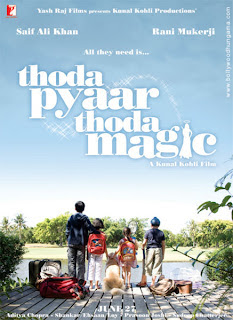 Watched "Thoda Pyaar, Thoda Magic" on Friday evening. Went to see the movie primarily for Betu. he has been demanding to go for a movie since weeks now and since this was one movie which we were sure he would enjoy, we decided to go for it. I wanted to go for the movie so that I can get a chance to ogle at sexy Saif! And must say I was not disappointed. He is looking really really droolicious!

Betu loved it of course because of all the magic and animation bits. And we must say we are so lucky that whenever we have gone to watch a movie in a theater, we have always found an empty seat near to us. So although we don't buy ticket for Betu, he always gets a seat for himself :D But this time the guard did stop us asking for his ticket. We managed to somehow convince him otherwise. But I wonder if next time it will work. Paying 200 bucks for him sounds a little too exorbitant.

But the after effects of the movie, on betu..not me *wink*, continued at home. He wanted to get inside the TV screen as the kids in the movie had done. However much I tried to convince him that it was a movie and it doesn't happen in real. it just didn't work and he got so angry that he refused to talk to me. Its another story that he was back to talking within a few minutes :)

I think the movie should be sold under the "Children" category only minus the Ameesha Patel's "Lazy lazy lamhe" number which was a bit too much for the eyes and minds of kids :) I wonder why does she always takes up such bimbette, no brainy kind of roles. I really wonder coz from what I know she was quite good academically so its not that she doesn't have anything in that part of the head. Anyhow...

Me and Hubby were empathizing with Rani thinking she had to do the whole movie in just one dress :)

So on the whole, it was a so so movie for us adults and an enjoyable one from the kids perspective!

Email ThisBlogThis!Share to TwitterShare to FacebookShare to Pinterest
Labels: Movie