A day at Adventure Island

We all, Myself, Hubby, Betu, Appa, my elder sister PG, her Hubby and Rishab went to spend a day at the Adventure Island, near Rithala Metro station on Friday, March 21, 2008. And we enjoyed every bit of our time there. Since it was exams time, there was no rush, and we could easily get on the rides without waiting in the queue and even take more than one rounds of a ride.

The tickets were Rs 375 or adults and Rs 300 for kids (criteria was height measurement: chargeable for 3ft or taller kids). The only negative thing was that we had to buy a ticket for Betu but out of 16 rides there, he was allowed only on 5 or so. On the rest they had the minimum height criteria for which obviously Betu didn't qualify then why the hell did they charge almost a full ticket for him??

Anirudh and Rishab had so much fun that they didn't want to come back despite the fac that they were so tired and drained out. PG and I went on a ride which was good but also a little scary. When it upturned and twisted and rolled us around, for a moment it felt we are going to fall off right from there. We both were continuously laughing and shrieking at the same time!

Here are a few pics of the car rides that Anirudh and Rishab did. One of them was strictly for kids only so Anirudh became the driver and Rishab the passenger. They had a foot button in this car which would give motion to the car and he was supposed to steer it using the wheel. It took Anirudh couple of minutes to figure out how to run it good and then he started to enjoy. 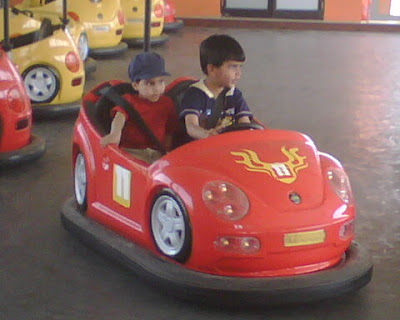 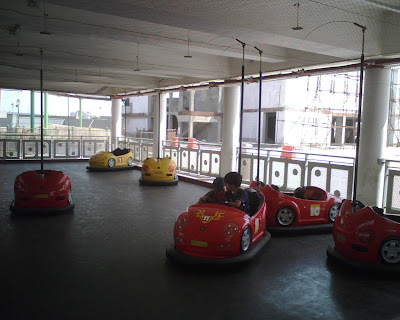 And this is the car where adults could also ride on. It used to swivel and rotate at the same time. And at times it would seem that the cars are going to collide with each other. It sure was a lot of fun for kids and they went for 2-3 rounds om this one. 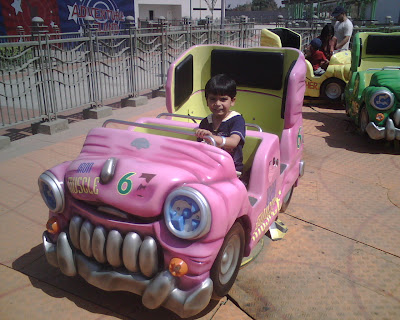