We are having little feasts since the past 2-3 days. Day before yesterday stuff paranthas, yesterday pasta in white sauce and today we had those mini snack pizzas. All home made. Or rather Me-made :D OK OK.. I didn't make the stuff paranthas but I DID make that pasta and today's mini pizzas. We are allowed to beat our own trumpets once in a while..right?

I will ignore the part that instead of snacking on those mini snack pizzas we actually gorged on them and made them our full fledged dinner. *wink*

I had got these mini pizza bases on Saturday evening and had actually planned on making them on Sunday evening but last minute plan changes and we went to meet someone for dinner that day. I had bought them with such enthu that I didn't want them to rot away. I was sure that they wouldn't last till next weekend so decided to make them today.

I made it in batches of two. Here's the pic of the first batch which Betu and DH polished off all leaving me 1 out of the 8 that I had baked. 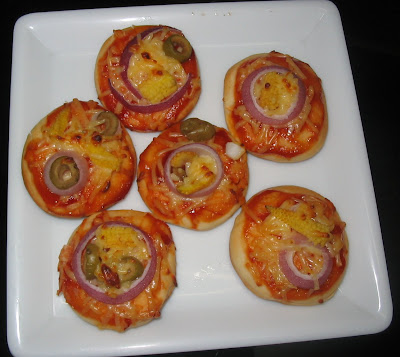 These are from the second and the last lot where extra cheese was added. Who cares about the extra calories or gaining extra weight..ehh? :D 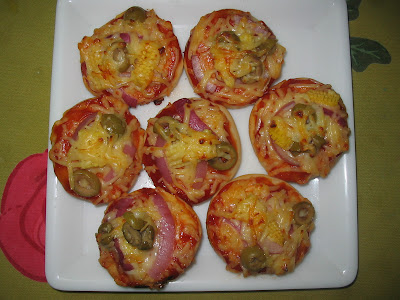 Since I didn't have much of veggies at home except for onions and baby corn and I was too lazy to make pizza sauce so the regular ketchup came to the rescue. And I also used the sliced green olives that I had in my stock. I also used the regular cheddar cheese as mozzarella was not readily available. Lot of workarounds and substitutions you may say :D Par kya karein "Papi pet ka sawal hai" :D

So how did we like them? DH and Betu simply lovvved them. After having quite a few Betu wanted more and had to be told NO just so that he doesn't over do. It feels so good to have the food appreciated which you have cooked after coming from work all tired to plonk off on the bed. Doesn't it?