I feel I'm one of those lucky ones who have not only seen their great grandmothers, paternal and maternal both, but also spent good amount of time with them. So its not just one of those picture memories for me but those REAL precious and fond memories.

Maiyyo - My Paternal Grandmother
She was my father's grandmother. We used to call her "Maiyyo". In fact, everyone used to call her with that name only. She was real fun to be with. With all the folk lore's that she used to sing and the way she used to be amused with certain things, it still brings a big smile on my face when I think of her. My earliest memories of her are when I was around 10-11 yrs. She was in mid 80s then I guess. With all the wrinkled skin hanging from anywhere and everywhere which we used to love touching and making it jiggle. And she used to give that beautiful toothless smile looking at us having fun of all the things with her wrinkled skin. When I think of it now, her smile seems no less than a small babies smile...the same toothless, innocent and beautiful smile. 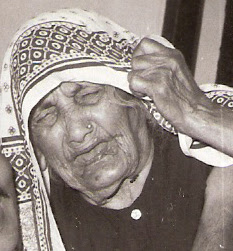 1983 : In this picture, Maiyyo is laughing as someone had picked her up! 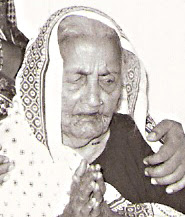 In summers, she used to love sitting in front of the coolers (ACs were a rarity those days). With the strong air blowing from the cooler would whisk away the pallu off her head which she would keep pulling it back on. Her silky white hair flying around while she would sit right in front of the cooler - real close, with her eyes closed and such calmness, serenity and satisfaction on her face. I still smile when I remember her words "Hooler (Cooler) chal lo hai?" in her brij lingo which in English meant "Cooler is running?". Whenever she would be thirsty, she would say "Moye ek katori thando paani de de!" (Give me one bowl of cold water).

I do not remember how and why but she used to call my father, her grandson as "Judge" whereas my father is a Civil Engineer by profession. So in the evenings she would enquire "Judge aa gayo?" (Judge is back from work?). Also, Appa(as I fondly call my father and we are not south Indians) was quite thin by physique and Maiyyo would take out her pointer finger and wave it saying "Kausala to.." trying to convey he's so skinny. And Appa would tell her "Sher ki bhi haddiyan dikhti hain" (you can see the bones of lions too!) and Maiyyo would have a little laugh and hug Appa.

How I wish I could have remembered the songs she used to sing. Some of the used to be about fights between Saas-Bahu (Mother in law and daughter in law). I still remember the naughty smiles on her face when she used to sing such saas bahu songs. And she used to simply enjoy singing them to us!

Maiyyo and her little aluminium baksa (box) with her minimal set of clothes which comprised mainly of white Saree's and petticoats. During the recent white washing at home, I came across the special Re 1 coin that she had given me once. This is how I earned that special coin -

Maiyyo had just come out of her bath and I saw her trying to wear her Saree but was fumbling with it. So I went and put it on her. Once I finished, she gave me a peck on my forehead and asked me to sit with her. She then opened her baksa and took out one small box. She opened it out came a smaller box. From the smaller box, out came a small cloth satchel, from there she took out a small handkerchief tied into a knot. After she opened the knot, I saw it had few coins and a few Rs 2 notes. So she took out one Re 1 coin and out it in my palm and closed my hands and gave me a big smile.

I was not more than 12 years or so then but still I remember how thrilled I was to get that prize! I could have easily spent that in buying some toffee or chocolate but I didn't. I kept it safely. So when recently I saw that coin again (I had put a note with it long back as a record of the memory) all the memories kept flowing in. Here is the picture of that coin and the note that I've kept with it. (I've blurred my signature on the note though) 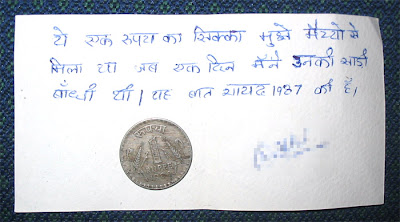