On Saturday Feb 14, was the craziest day this year so far. It was a rush rush rush situation from morning till late night. The details will follow in a later post.

Betu had a school play scheduled at his school. Once I was done with getting Betu ready Hubby went to drop him at his school. The same day we had to travel to Kota to attend hubby's cousin's marriage. So once they left I got busy trying to take out the clothes that we needed to carry. It was 9 AM and the stomach was growling with hunger. Hubby was taking a bit longer to return and I thought maybe he is getting something packed from Betu's canteen as he had mentioned the previous night. I again drowned myself in the packing frenzy with the hope of some food on the way. Soon I heard the door open and without even turning back I asked him to quickly take out his clothes so that I can put them in the suitcase. And then I heard him say "Happy Valentines day!". I turned around with a blank confused look on my face and saw him walking towards me holding a lovely bunch of red roses. I have no words to describe what I felt at that moment. From surprised to happiness to feeling all mushy. 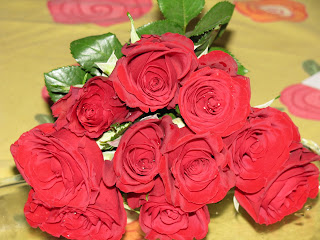 Aren't they so beautiful? :)

It reminded me of my first valentines day celebrations way back in year 2000. Something similar had happened that time too.

Hubby is not the kinds who believes in gifting or doing special for such occasions. And I love it when he gives such surprises when I'm least expecting it.

I love you so much jaanu.