This is my entry for this months topic of 'Treasure' at the monthly contest at Point & Shoot. 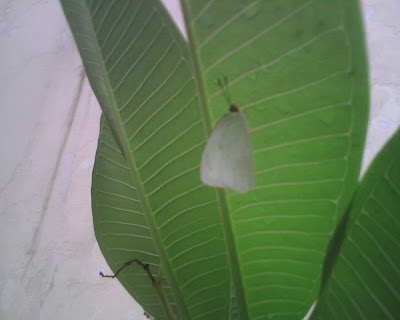 July 7, 2008 : In our house
Title: The treasure of flight!
It was around 6:40 PM and me and Betu had just returned home after I had picked him up from his daycare. As I was busy trying to unlock the jammed lock I heard Betu shriek and then he started to jump up and down. I swung my head towards him a little bewildered wondering what triggered all this. When I looked at him, I saw such a big smile on his face, gleam in his eyes and happiness that cannot be told in words. He pointed at a leaf of the 'champa' plant in our house at the entrance and said "Mumma dekho! Butterfly!". And when I focussed I saw this - A lime green butterfly which was almost camouflaged with the leaf. It sat there even when Betu tried to touch it and did not flutter away as butterflies usually do. As if it was waiting for Betu. Once Betu had touched it couple of times that it flew away! And Betu shrieked again..in happiness. It was truly a 'treasure' found by him making him so happy. Now you know why I chose this picture for sending for the contest.

And did I tell you my previous entry to the contest was declared the winner in that months' topic "lonely' :D

P.S. The resolution & quality of the photo is not great since I used my phone to click this.