..and somehow it feels no different than any other day. But then is it supposed to?

Anyhow...we had a wonderful impromptu celebration with a cousin bro, Avi bhaiyya, who stays close by. And when I say close by, I mean a 2 min walk :)

We had no plans of going anywhere and I was busy making the eggless orange cake when he called to ask our plans. When we said none, he called us over for some soup and macaroni salad. Who would have said no to that :D

So off we went to their place with my just out of the oven orange cake which was devoured and finished within 10 mins. It was then followed by some good Indian white wine and must say it was awesome.

After licking the soup bowls clean and eating yummy macaroni salad, we came back home by 11 PM and I promptly dozed off while putting Betu to bed and woke up only around 8 in the morning.

Here is the pic of the orange cake that I've intentionally mentioned too often ;) Although the picture doesn't do justice to the cake. Am planning to make it again on Sunday and shall click a better picture of it then. 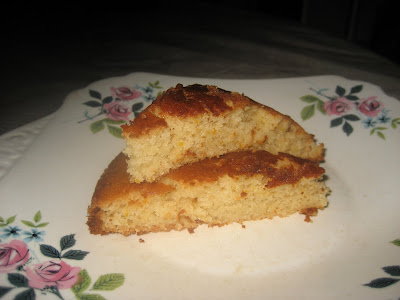